This past weekend, I joined the other teachers from my school on an “excursie” (field trip) to two monasteries in the northern part of Moldova, Saharna and Ţîpova.  We departed from our village in a rented rutiera (small bus) at 5:30 in the morning.  It was a bit over 3 hours from our village to our first stop in Saharna. 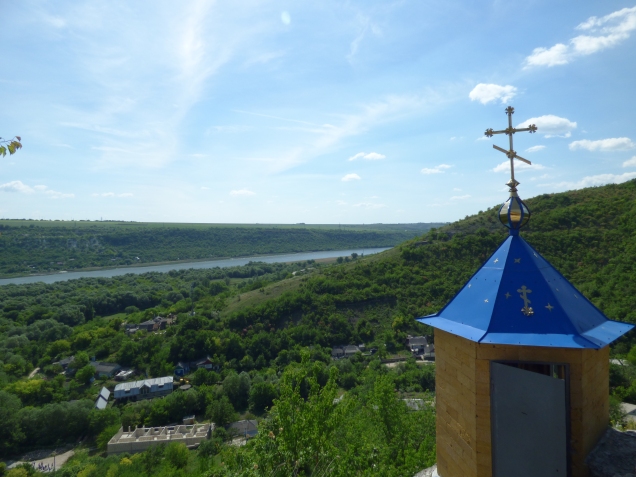 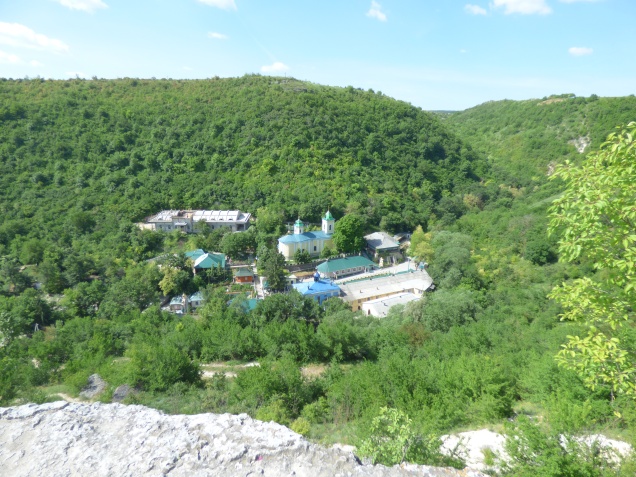 We walked around the Saharna monastery for a bit, visiting the main church. On the hills surrouding the monastery there are crosses that you can walk to.  We walked up to one of them- it was a somewhat difficult, steep hike. Here, there were gorgeous views into the valley and overlooking the Nistru.

On our way back down the hill to the monastery, we stopped to take some pictures as a group.  I handed my camera off to Maxim, the seven year old son of one of the other teachers, so I could get in some photos.  He did a pretty good job!

Most of the rest of our group visited the izvor, or spring, that is located in the woods at the monastery.  Here, you are supposed to change into a nightgown or robe and dunk yourself fully in the freezing cold water.  The water is said to have healing powers.  I did not participate, but I walked down to see the izvor.  There were a lot of mosquitoes, so I went back to the entrance of the monastery with the Russian teacher from my school and we waited there for the rest of the group.  While sitting by the entrance, I saw a woman who I thought was another volunteer, and it was!  She was also visiting the monastery with her school.

From Saharna, we headed to Ţîpova Monastery.  In addition to being a cave monastery, it is also a historical site and museum.  We started off at the church at the top of the hill, which is actually a different monastery.  From there, we walked down a steep incline and then back up and then down again.  Ţîpova is located right along the Nistru River and the views were incredible!  There is an entrance fee, though it’s pretty small, and our group paid for the guide.

Ţîpova is one of the oldest monasteries in Moldova, built in the 14th century.  It is a cave monastery, built into the side of a small cliff.  During Soviet times, it did not function as a monastery and fell into disrepair.  Although some renovations and restorations have occurred since Moldovan independence in 1991, they are currently raising money to do more complete restorations, particularly, of the sanctuary built into the cave.

We visited the sanctuary, where services are held Saturday evenings and on major holidays.  There is a small exhibit/museum off the sanctuary with some of the history of the monastery as well as images showing what they hope it will look like when restorations are complete.  We also checked out some of the smaller caves down below and above, where the monks would have lived and worked. 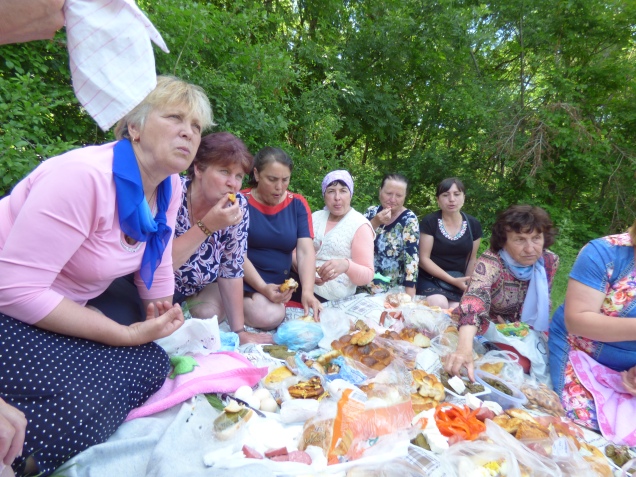 After climbing back up the hill to the church on top, we headed back towards home.  After a difficult day of hiking and climbing, we were all very tired and hungry.  According to Orthodox faith, you aren’t supposed to eat before you visit a monastery, so our first meal of the day occurred an hour later when we stopped by the side of the road around 3:30 in the afternoon and had a large picnic.

Each of the teachers had brought boiled eggs, placinta, bread, sarmale, and other foods.  Of course, there was also plenty of house wine!  There were also some of the first cherries of the season!  Once we had finished eating, we drove the final two plus hours home, getting back around 6:30.  It was a very exhausting day, but it was fun!  I especially loved Ţîpova and would recommend going there if you’re ever in Moldova.

From Curchi Monastery, we continued on to Orhei Vechi, stopping briefly at a small monastery that was out of the way for a peek.  Then we continued on until we reached a vantage point.  Orhei Vechi is located in a large bowl-like valley, with cliffs on two sides and the river weaving along the edges.  We could see the Orhei Vechi Monastery on the other side of the bowl. 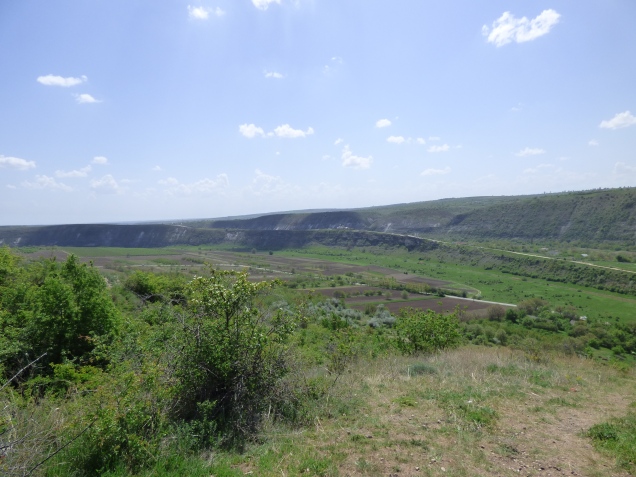 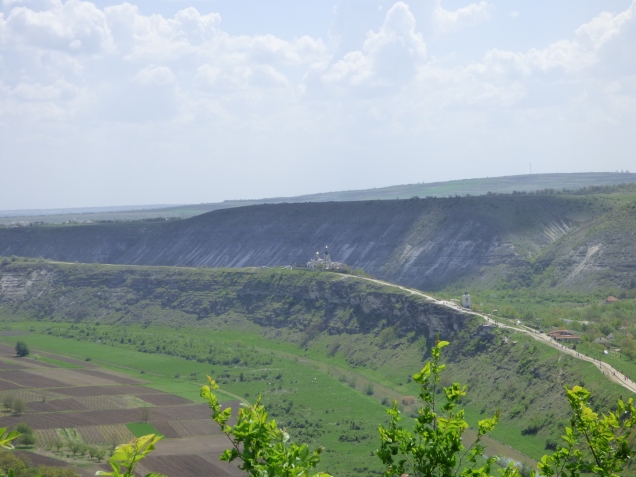 From here, we took a short detour to view the remains of a fortress, as well as some Turkish baths left from one of the various points in history Moldova was under the rule of the Ottoman Empire. 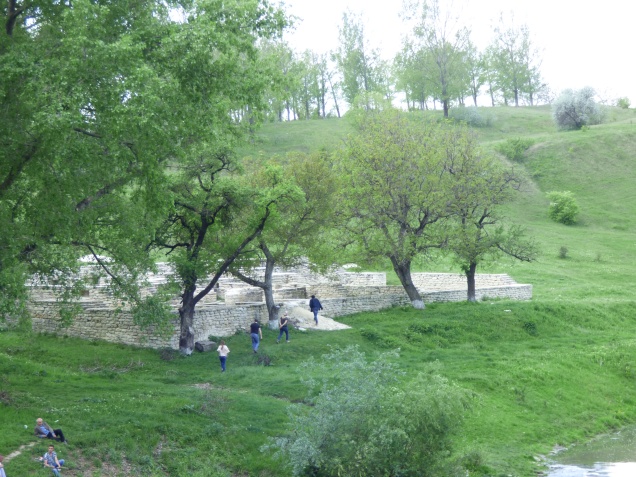 We also hiked up to some caves, which though natural and impressive, have been covered in graffiti and litter.

Then we finally arrived at our main destination: Orhei Vechi Monastery.  We looked around the small museum, then walked with a guide up to the cave monastery, located under the bell tower.  Inside, there is a small chapel and a room with a low ceiling carved into the cave.  This is where the monks lived and spent most of their time, laying and sitting on the hard stone floor.  The monastery dates back to the 1400s and also includes a church. 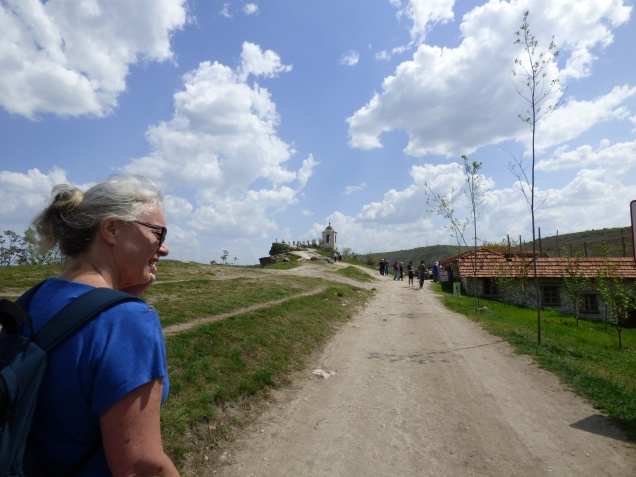 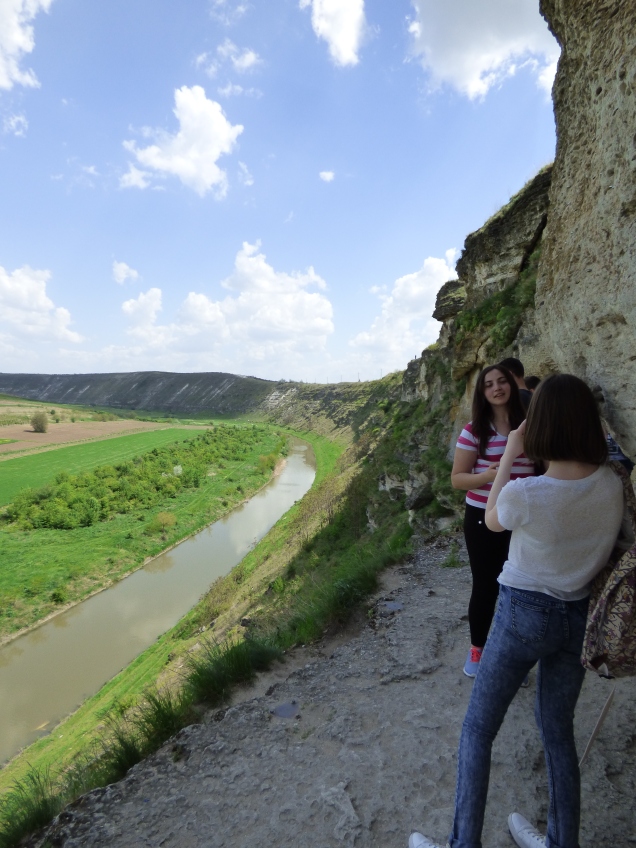 Our last stop on the tour of Orhei Vechi was a “peasant” house.  This is a preserved old home that shows how Moldovans used to live.  There was the main house, which consisted of a living room to the left (with space above the soba, or stove for about 8 children to sleep), a central hall, and a casa mare to the right.  The casa mare would have only been used for guests or when there were special events and occasions.  In another building, there was a separate room that would have been used in the cooler months for the entire family.  Two small beds would have been for the parents, and a sleeping loft of sorts above the soba would have slept about 10 children.  There was also a beci (pronounced “betch”, underground root and wine cellar) next to this. 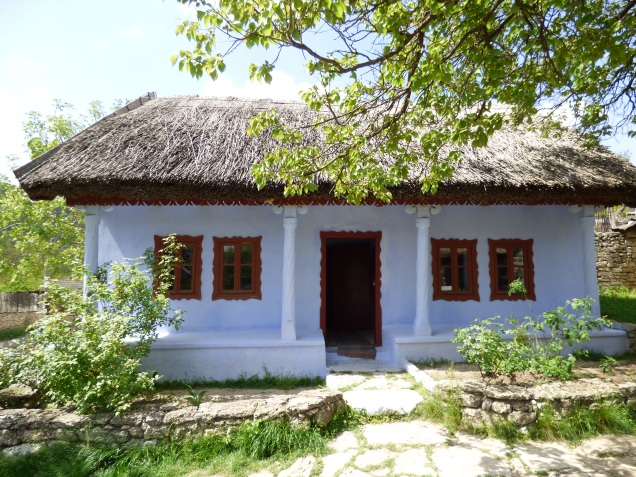 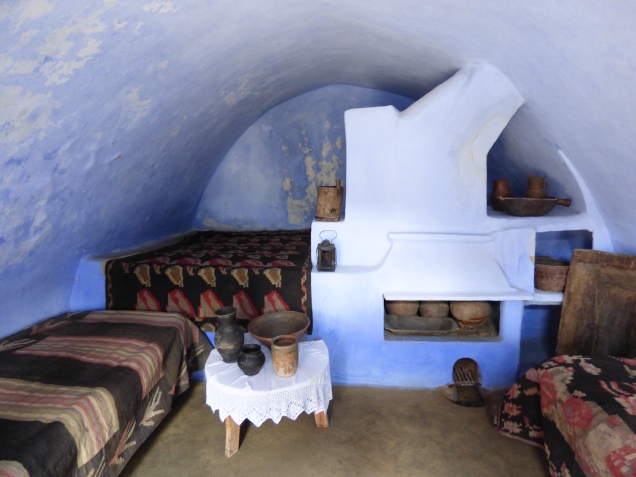 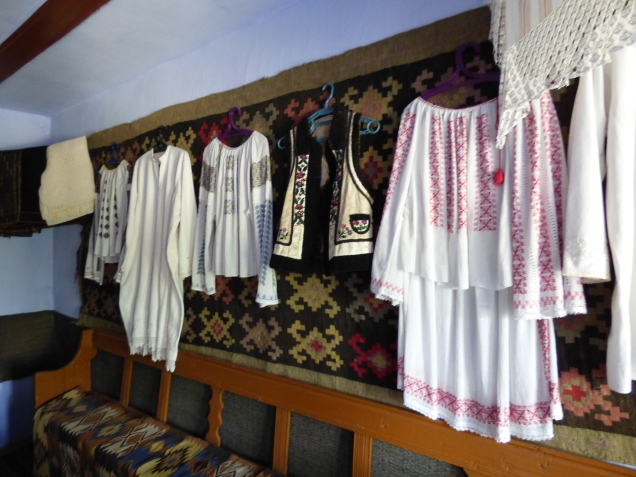 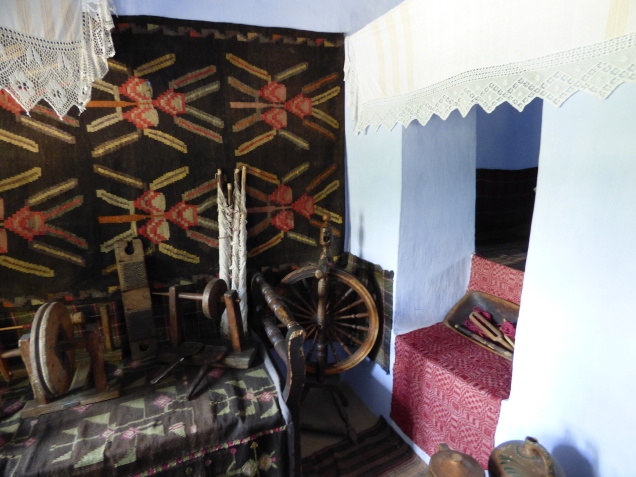 This wrapped up our guided tour, and we headed back to Chisnau for the night.

On Sunday morning, we headed towards Orhei Vechi, which is probably the most popular tourist destination in Moldova.  We had hired a guide, and both of us were really happy to ride in a comfortable, air-conditioned car instead of a rutiera! On our way, we stopped at Curchi Monastery.  The monastery was built in the 1700s, though the current churches were built in the late 1800s.  When we arrived in the parking lot, we got out and got our first glimpse of the church, which is situated above a pond. 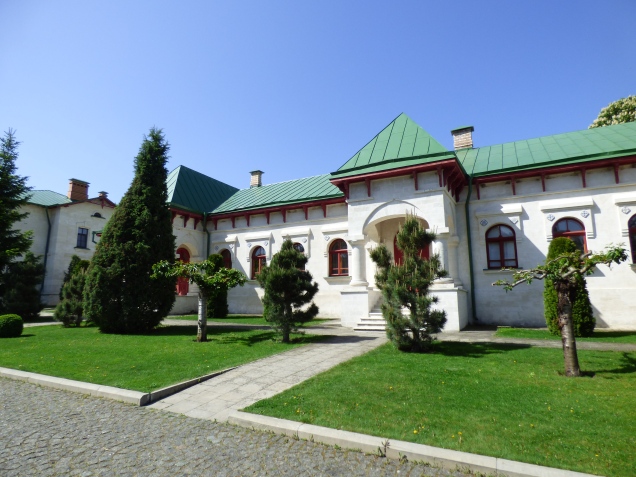 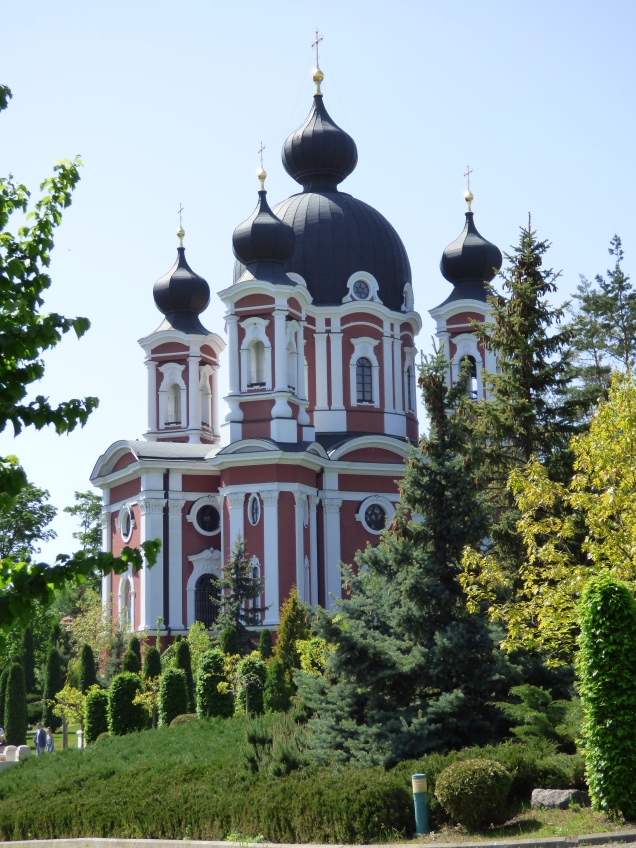 We walked around the grounds, and even caught part of a church service.  Pictures aren’t allowed inside the churches, but they had been beautifully restored.  In comparison to other churches and monasteries I’ve visited here in Moldova, these were decorated in richer colors.  The entire inside was covered with large murals.  The monastery had been used during Soviet times to store grain, and renovations were completed in 2006.

This week has been a very busy, full week.  I’ve had language and technical classes  almost every day, I’ve helped my host family prepare for my host cousin’s wedding, I went to Chisinau for a hub site day, I attended my first Moldovan wedding, and I visited a few Moldovan monasteries!

It was overall a very good week, but it was also a very exhausting week!  This week in language classes we learned a bunch of new verbs and how to conjugate them, as well as the words for a large number of fruits, vegetables, and other foods and drinks.  My language instructor, Galina, used a total body response method to teach us the fruits and veggies.  For this, we used motions and didn’t speak at all for at least the first 30 minutes of class.  First, Galina put up pictures of each of the fruits and vegetables on the board, repeating each word several times as she did so.  We then each had to go up to the board to select certain ones.  Then she would say different words and we had to show her and the other students the pictures.  We continue to practice in similar ways before we were shown the written words and worked on pronunciation.  This technique was very effective.  We learned over 20 fruits and vegetables, and I can still remember them with little additional practice.  We used a shorter version of the technique to learn an additional 25 food words the following day.  We also learned how to ask how much something costs and request a certain amount of [whatever] at the market as well as how to say “I like…” and “I don’t like…”.

We also had technical trainings on:

Outside of class, I spent much of my week helping my host family with wedding prep.  I will post separately about the wedding, as I have a lot to share!  The wedding was on Friday, so I spent Thursday helping clean and blowing up balloons with my host brother for decorations.

The Peace Corps staff then took us to visit several Moldovan monasteries (which will also be a separate post!).  Although I was exhausted, I’m really glad I went- the monasteries were beautiful and so peaceful.  After visiting the monasteries, they had arranged for us to go into the forest where we had a Moldovan BBQ.  The food was FANTASTIC and it was nice to be outside in nature.  When I got back, I ate dinner, then took a 4 hour nap.  I woke up and did some homework and skyped with my grandparents briefly before eventually going back to bed.  A busy, full, and culture-filled week!