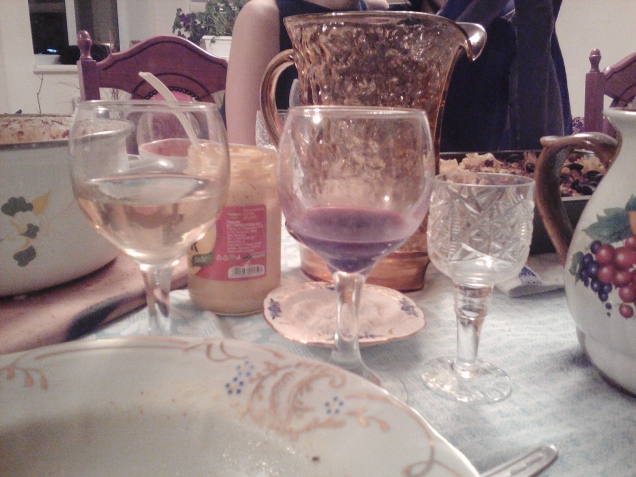 This past week was the first time I’ve celebrated Thanksgiving abroad, without my family.  The actual day of Thanksgiving was almost like any other day here.  I went to school, taught 5 lessons, several of which didn’t go particularly well, then planned with my partner for several hours after school.  At one point I was a little sad and homesick as I thought about what I was missing at home, but I had the opportunity to skype briefly with my family in the United States, which helped a bit.  Then, right before bed, I managed to catch my grandparents on the phone for a quick conversation.  It was my first time talking to them in over 3 months, and I miss them very much, so I was grateful for the 30 free minutes of international calls each month we get on our Peace Corps plan.

I hadn’t planned to celebrate with other volunteers, mostly because I had some work to do at home and have travel planned for next weekend, and I just thought I could use a quiet weekend at home.  On Friday, I had to go to the capital to pick up some medication and while at Peace Corps, I ran into another volunteer.  She encouraged me to come to the north of Moldova for the weekend to celebrate with a group of volunteers.  In the end, her promise of mac and cheese won me over, and after a quick phone call to my host mom to make sure it was okay, I headed to the northern bus station and hopped on a rutiera to Ungheni.  Ungheni is located in the northwestern part of the country, about two hours from Chisinau in the opposite direction of my town.  We lucked out in terms of transportation: we arrived at the station five minutes before our rutiera was due to leave, bought tickets, and then were granted two seats in the front row with the driver.  They were real seats like you might find in a car, and they were very comfortable and provided us with an excellent view.

We arrived in Ungheni and met up with a couple of other volunteers, all of whom I hadn’t met before.  We had some drinks, went grocery shopping for the feast the following day, and grabbed some pizza at a local restaurant.  We then headed to one of the volunteer’s houses, where we spent several hours eating, drinking, and talking with his very generous and kind host parents.

On Saturday, we headed to the house of another volunteer to prepare our feast.  Our menu included: mac and cheese, barbequed chicken legs, gumbo (made by a native Louisian), mashed potatoes, an Italian casserole dish, homemade cookies, bruschetta, house wine and other house alcohol, as well as some store-bought beer.  We cooked and baked most of the day, and then sat down to enjoy our feast.  There were eight volunteers, and three host family members.  The food was delicious and mostly American, the wine was plenty, and the company was great.  The host dad that had allowed us to use his kitchen and host the feast in his house even played the accordion for us and one of the volunteers played guitar.

Towards the end of the night, one of the volunteers skyped with his grandmother in the United States, who had immigrated from Poland.  Our Moldovan host played, at his request, a Polish song on the accordion, which was a very special moment that involved three languages, plenty of translation, and some tears.

The next morning we played some Bananagrams over breakfast, then walked through the town to the lake, which was peaceful and chilly before heading back home.  Although my trip home was long and not-so-pleasant, I was glad I went and enjoyed a great weekend with new friends.