I have been very blessed to have a wonderful father and two amazing grandfathers in my life.

Growing up, I was always a Daddy’s girl, and that hasn’t really changed much over the years.  My dad is kind, loving, and a great listener.  He is always there for me, even when I’m not the most enjoyable person to be around.  He supports my dreams and encourages me to chase after them.  When I’m upset, nothing calms me down like a hug from him.  I love driving backroads with him for hours and when I got my driver’s permit, he would let me drive all over the countryside, him pointing out where different people live and memories from his younger days (he sells real estate, so he knows the backroads really well).  We often work on construction/home improvement projects together, and I have learned so much from this time spent with him: how to use power tools, how to spackle walls, how to paint, and how to fix and build things.  When I was 8 or 9, I helped him put up a wood-paneled wall in my parents bedroom and I remember feeling so proud that I was allowed to help out by using the nailgun and helping get things level.  He was always so patient when I helped him.  Rather than rushing through a project, he would explain the best way to do things and how to safely use the tools we were using, and then he let me do it, even though it would have been much quicker and easier for him to just do it.  I hope that someday, I can pass this on to my own kids and that I will remember how important it is to let them help and gain some independence, knowledge, and pride. 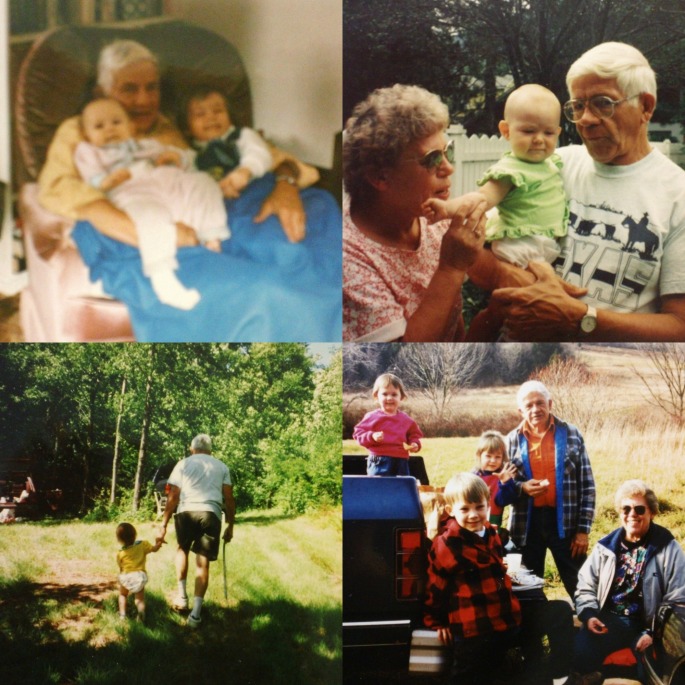 I’ve been very fortunate in my life to have two grandpas involved in my life.  Both of my parents grew up in the same small town I grew up in, which means I grew up in the same town both sets of grandparents live in.  Although my dad’s mom passed away before I was born, my grandpa remarried to a wonderful woman and is still living today.  My mom’s parents have always lived just around the block from us, so I spent a lot of time at their house both growing up and now.  We would spend the majority of our summers at their house, swimming in their pool, baking with them, and playing cards and other games.  When my cousins would come and visit, we would alternate nights staying at their house and at our house.  My sister and our cousin Jacqui would sleep there one night, and then the next night, my cousin Iris and I would sleep there.  Poppy (my mom’s dad) is a true example of a respectable old man.  He has worked hard his entire life and continues to work hard even now.  He is kind and patient and he loves to sing.  I can remember him teaching me how to dance when I was only 4 or 5, my feet on top of his as we danced to oldies songs.  From a young age, he would let us help him make his mother’s delicious cinnamon and regular rolls, a process that takes most of the day.  When we were swimming in the pool, he would toss us green beans from the garden, which always tasted good combined with the chlorine from the pool.  People I barely even know will tell me stories about Poppy from when he was the ag teacher at school or the principal of our local BOCES.  One of the custodians I worked with last year at my summer job said, on several different occasions, that Poppy was one of the people he respected the most.

[Me and Pappy; Pappy with all the grandkids (minus Sarah, who wasn’t born yet)- I’m on his lap on the left]

Pappy (my dad’s dad) is a Korean War vet who is very proud to be a Marine.  From him, I have inherited my love of houses (he owned the family real estate business before my dad took it over).  He has a strong work ethic, and continues to work now, even though he is in his 80s.  He and Poppy grew up together, and I love it when he tells us stories of “the good ole days”.  He is a good story-teller and loves to tell stories of growing up in our town.  As a young teenager, he would sell the manure from his family’s farm in town to gardeners and saved his money until he could pay for flying lessons.  He didn’t get his piloting license until many years later, but it shows the ambition and entrepreneurial spirit he had.  After fighting in the Korean War, he got his piloting license and eventually purchased a plane.  I’ve always wished I could have flown with him, but he sold his plane right around the time I was born.  When we were really little, he had an antique car (I don’t know what kind, but it was a dark green color and didn’t have seatbelts).  Every year, after the antique car show in our town, he would give us a short ride around town.  When I was in 9th grade, I went hunting with him.  It is the only time I’ve ever been, and we didn’t see a single living creature, but we still had a good time.  For a while, we just sat on a stump in the middle of the woods and he told me about the grandma I never knew.  About how she loved to sing and played the piano and that when my sister and I sing every Sunday in the church choir, it reminds him of her.  I didn’t really know much about my grandma before that, and I treasure the stories he told me.  I remember lots of fun, family picnics at his house, always filled with laughter and stories and going up there during sapping season to help tap trees and gather the sap, which we then watched, mesmerized, as it boiled.

I couldn’t have asked for better male role models.  I have been so, so lucky to grow up so near to my grandparents and to be able to spend so much time with them.  I am lucky that they are both still living and able-bodied.  I am lucky to have both a dad and two grandpas whom I know love me.  And I’m lucky that I have so many wonderful memories of all three of them.