**This is a long post, so I am truncating it.  Please read on to see more pictures/hear more about my trip!

We started Thursday off in Puno, leaving the hotel pretty early to start the drive to Juliaca (where we would be catching a plane to Lima).  On the way, we stopped at another Pre-Inca and Inca site.  This site was used as a cemetery and burial place for both the Pre-Incas and the Incas.  It is called Sillustani, which means fingernails because of the little peninsulas that go into the small lake.  There were several tombs, along with amazing views of a nearby lake.  We walked around the site and our guide Percy explained the burial rituals and practices of the Pre-Inca tribes and the Incas. 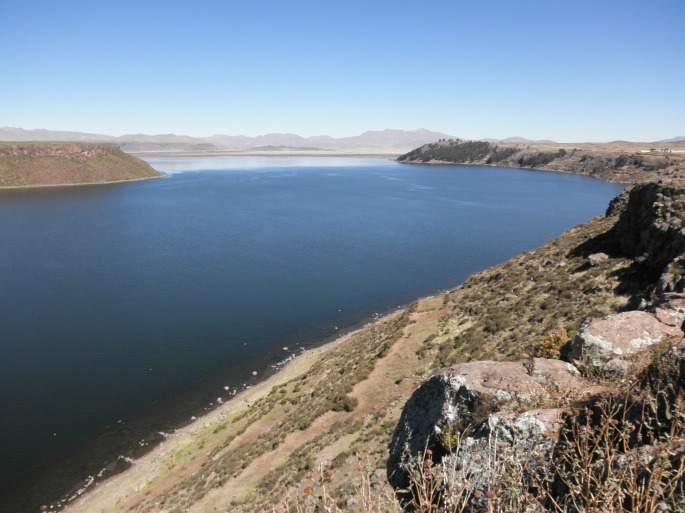 Our next stop along the way was at a rural family’s dwelling.  The dwelling consisted of several separated rooms arranged around a courtyard.  Everything was made of stones, even the beds.  They cooked on an outdoor fire.  One of the family members showed us some of their farming techniques (they don’t use machinery or animals for planting/harvesting) and we saw where some guinea pigs were being raised. 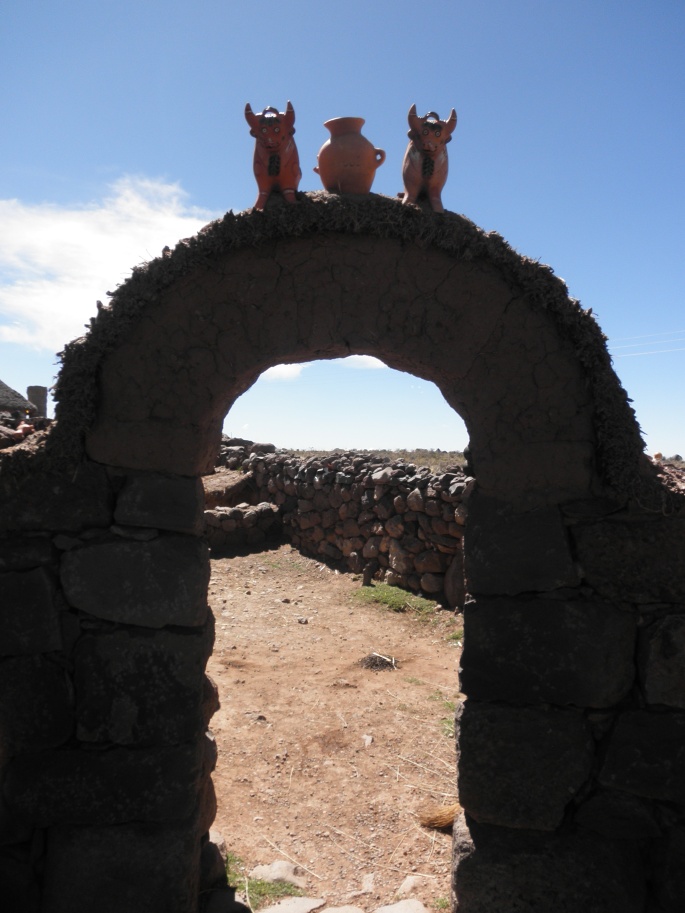 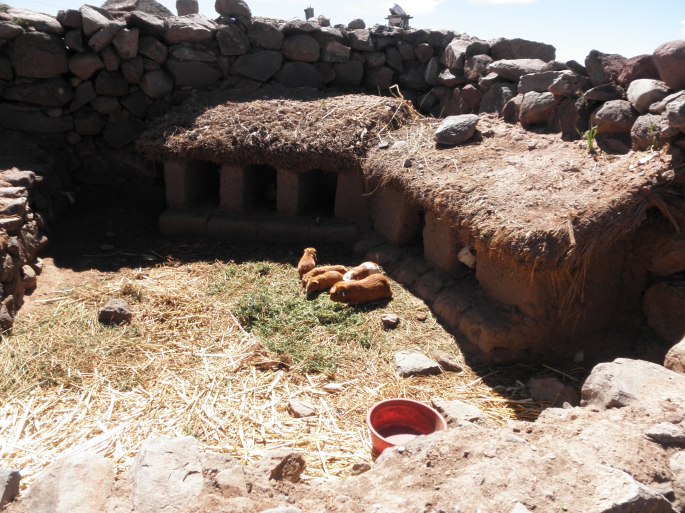 From there, we drove on to the Juliaca airport.  We ended up waiting in line for a VERY long time (it was rather unorganized and slow), but didn’t have to wait very long to board the plane, which was nice.  The plane ride was pretty short, about an hour or two.  When we arrived in Lima, we got our luggage and stuff but then realized we didn’t know when the other group was going to arrive (we were waiting for them before heading to our hotel).  We ended up waiting about 3 hours, but we passed the time telling stories and such until we were finally reunited!!!  We were very excited to finally be reunited with the rest of our Elmira group and spent most of the ride to the hotel sharing stories.  Our new guide, Franz, told us a lot about Lima and Peru as well.  We checked into our hotel rooms (which were very nice) in the Miraflores district of Lima before walking to La Lucha, a sandwich and milkshake place, for dinner.  After dinner, we returned to the hotel and hung out before walking back in the direction of La Lucha to go to a disco.  We had a lot of fun dancing and such and spending time with our “long-lost” friends from the other group.

On Friday, we got up pretty early to go on a driving tour of Lima.  We went to the market first, where we tried all sorts of different fruits.  We then went through several of the different districts and along the coast.  Our guide was very good and told us a lot about the economy and politics of Peru.  We stopped in the Barranco District, where we got out and walked around.  We also stopped at the top of a mountain overlooking Lima, where there is a large statue of Jesus that overlooks some of the poorest districts, including the shanti towns.  For lunch, we ate at a small restaurant.  Almost all of us tried Anticucho, a Peruvian delicacy (beef heart), which was actually really good.

We then had free time, so several of us walked to the beach.  We really wanted to paraglide/take surfing lessons, but we were all low on money and weren’t sure we would have enough time, so we just went to the beach and hung out.  It was pretty peaceful and the water was actually pretty warm (it was a really hot, humid day), but the stone beach (no sand) was a little hard on the feet. 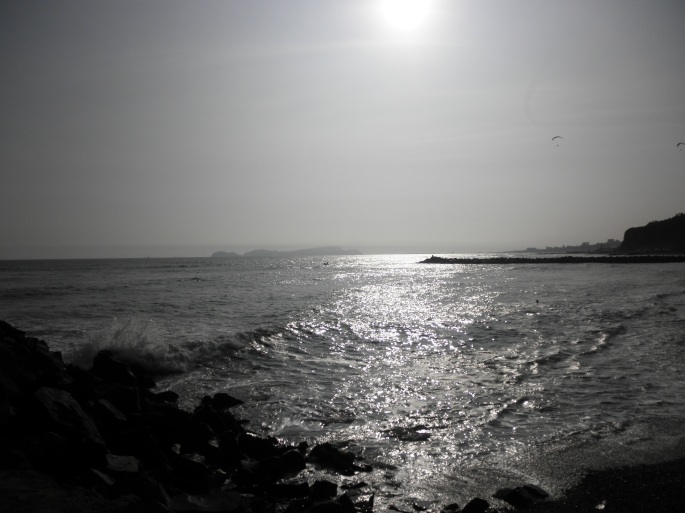 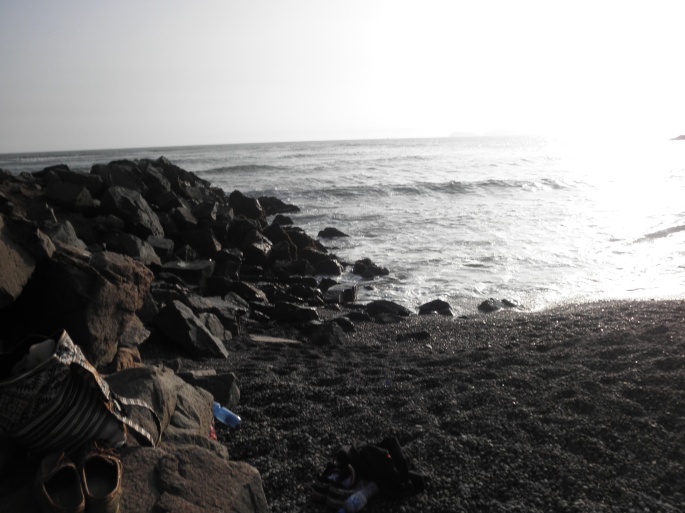 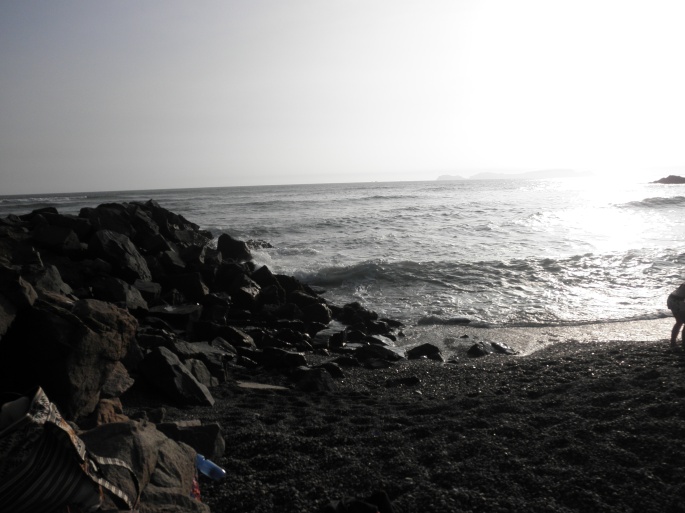 We then met everyone for dinner at Tanta and then loaded the bus up to take a bus tour of the historic district on our way to the airport.  We saw the Plaza de Armas and San Martín Plaza, along with some other places in the historic district.  Although it was nighttime, most of these places were all lit up and quite beautiful, although it was sad to see the disrepair on some of the streets.  It is apparent that these homes were once really magnificent and beautiful, but many are now barely recognizable (if you look up, many of the beautiful balconies are still quite beautiful, which was nice).  We arrived at the airport and checked in, and then waited until we could board the plane.  I accidentally packed a letter opener in my carry-on (I completely forgot it would be considered a sharp object), so unfortunately my bag had to be searched and the letter opener was confiscated, but otherwise the process was pretty simple.  We departed just after midnight and arrived at JFK at about 9 the following morning. 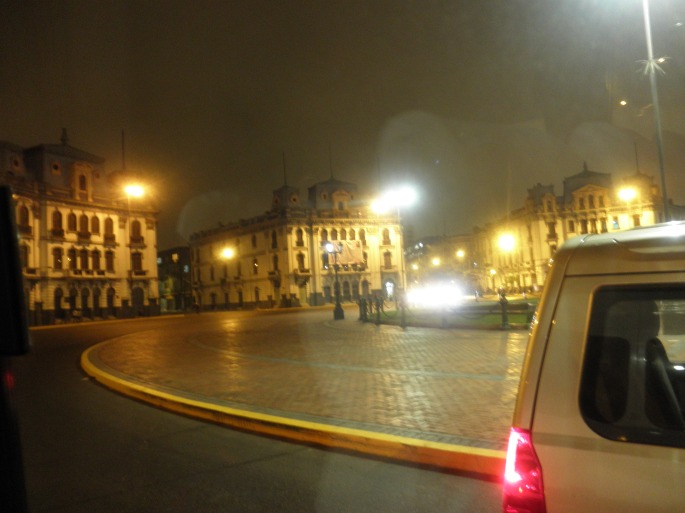