**I am truncating this post because it is VERY long with a ton of photos, so please read on to see more!**

This part of the trip was my favorite!  We started off Tuesday by checking out of the hotel (they stored all of our luggage for the 2 days we were gone) and taking only a change of clothes, basic toiletries, and cameras/money in a backpack for our 2-day excursion on Lake Titicaca.  It’s been a while since I had been on a boat, so it was really nice to sit on the back deck of the boat and feel the sun and gentle breeze on my skin.

Our first stop was at Uros, a series of small “floating” islands.  The islands are made by hand every 10-15 years out of reeds and then anchored.  The buildings and such are made mostly out of reeds as well.  We were pretty surprised to learn that most of the people had televisions, which are powered by small solar panels.  The way of life on these islands is very basic.  The woman spend their days embroidering things to sell to tourists and the men fish.  There is a school (elementary), small hospital, and post office on the largest of the floating islands.  A teacher comes by boat each morning from Puno to teach at the school.  Many of the older kids take a small motor boat to the mainland each morning in order to attend high school.  It was fascinating to learn how they build the islands and about the way of life there.  Although it was really interesting, I don’t think I would like living there.  Many of the people who live on these islands have a lot of health issues.  The moisture from everything being made of reeds causes a lot of illnesses and the softness of the reeds underfoot causes leg and feet problems. 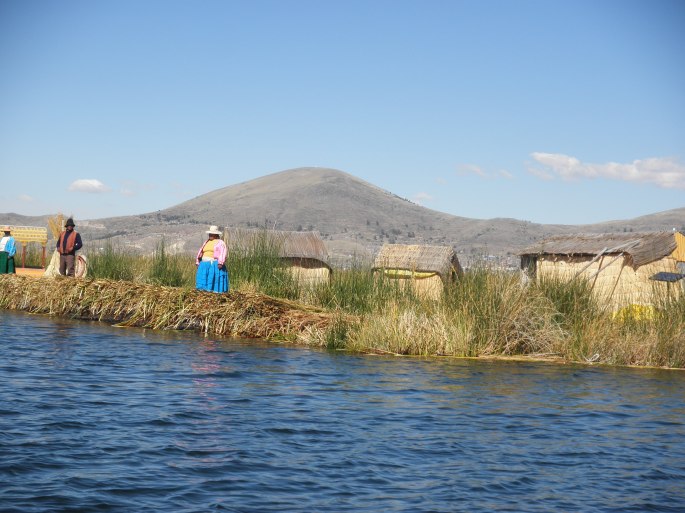 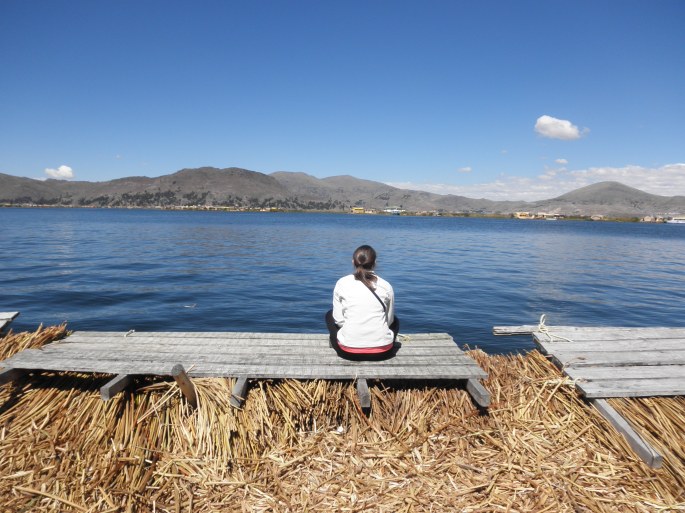 From there, we rode in the boat (it was a pretty slow tour boat) another 2 hours or so to Amantani Island, which is a beautiful island far from the mainland.  I loved it here! The way of life is very simple, but I think I could live there.  Everyone was really nice and it is so peaceful.  There are no cars or motorized vehicles, so most people walk everywhere on very well-constructed stone paths.  There is an elementary school and older children often live in Puno during the week in order to attend high school.  There is limited electricity and what electricity there is comes from small solar panels.  There is running water, but it appeared to be limited.  The place we stayed at was really nice.  There were no showers, but there were bathrooms and the rooms were really clean.  After a delicious lunch of quinoa soup (which I loved!) and bread, we had some time to rest. 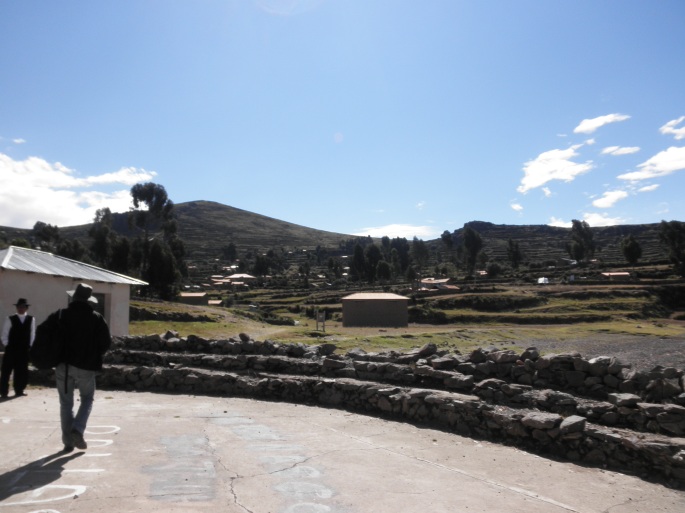 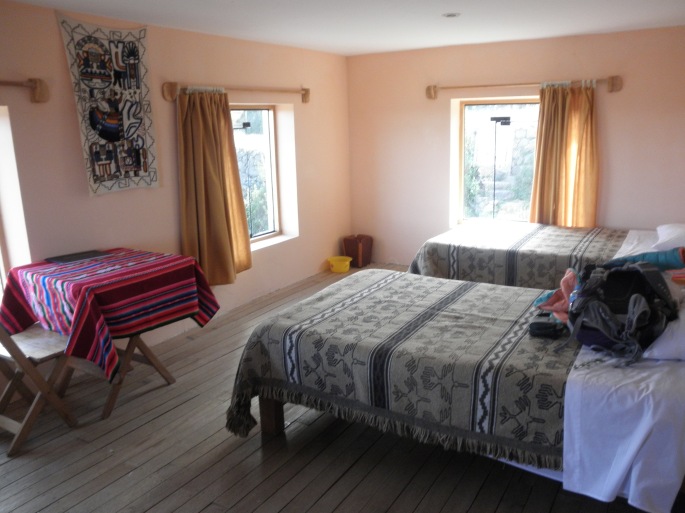 After our naps, we were planning to hike up to the top of the island, where there are 360 degree views of the lake and island, but it was raining quite hard, so we waited until it cleared up.  As the rain lightened, two of the largest and brightest rainbows I have ever seen appeared.  It looked as if they were really close and you could just walk a little ways and be able to touch them. 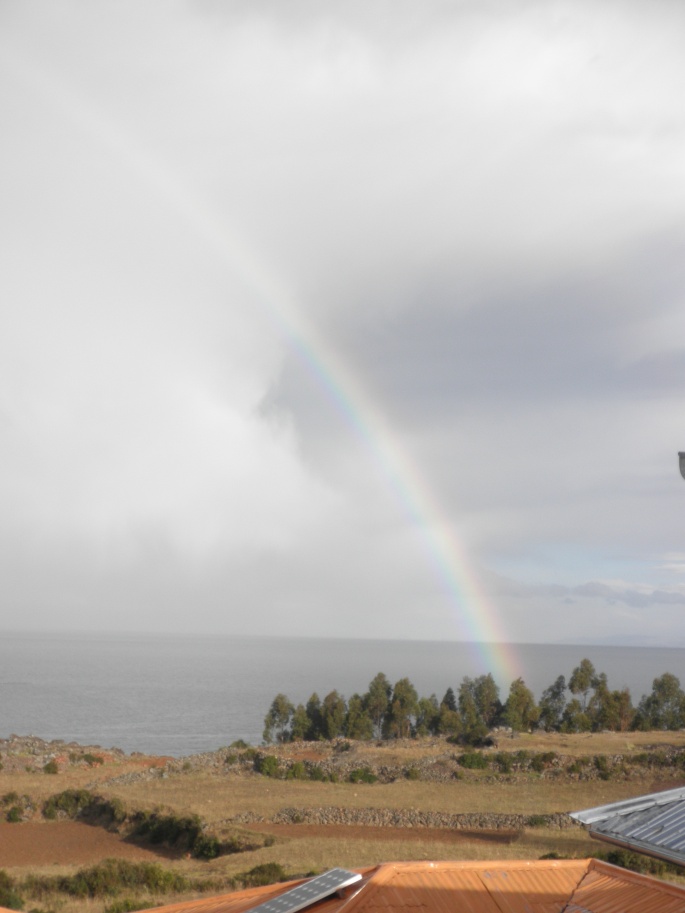 Once the rain stopped, we headed up the mountain.  The initial walk wasn’t too bad, as we were on the well-maintained stone paths and it wasn’t too steep.  We passed by the soccer stadium (which seemed so out of place in contrast to the old-fashioned way of life we saw all around us).  Shortly after the soccer stadium, we left the stone path and started up the steeper part of the mountain, with lots of steps.  This part was a bit difficult, especially since it was at a pretty high elevation. 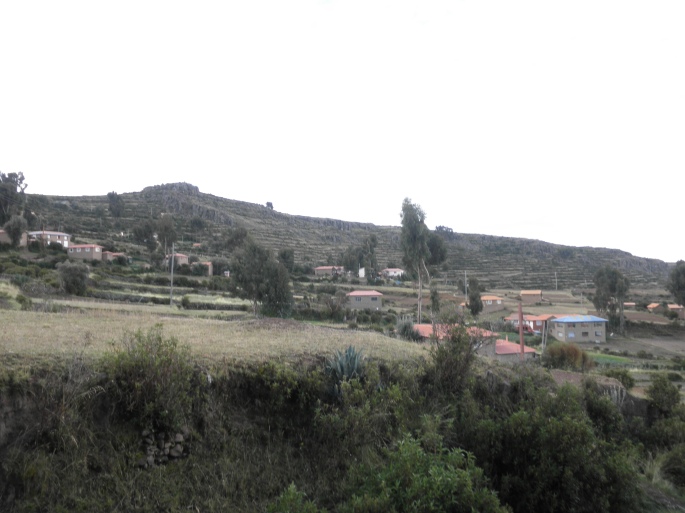 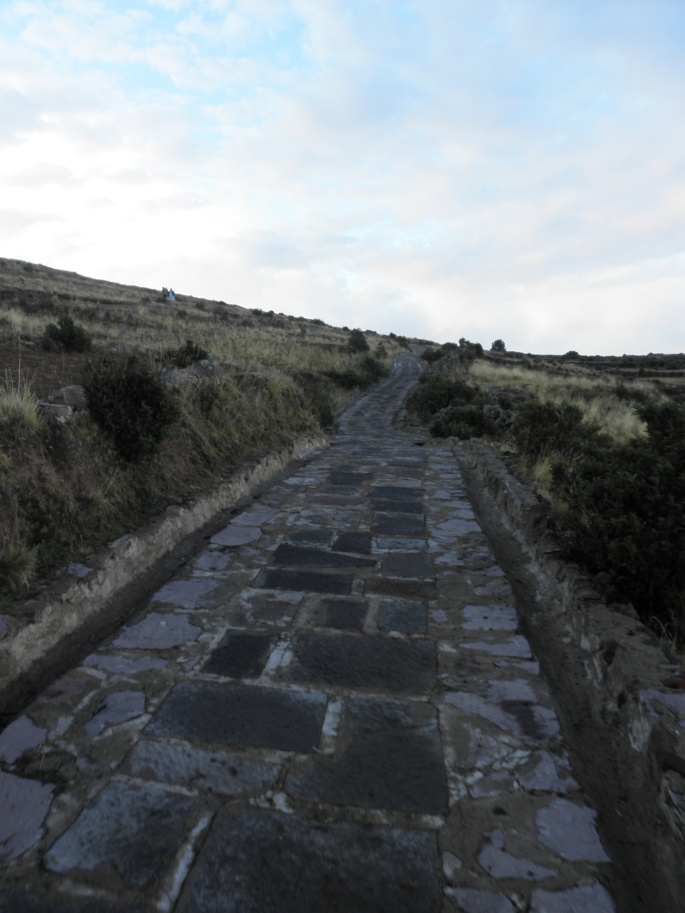 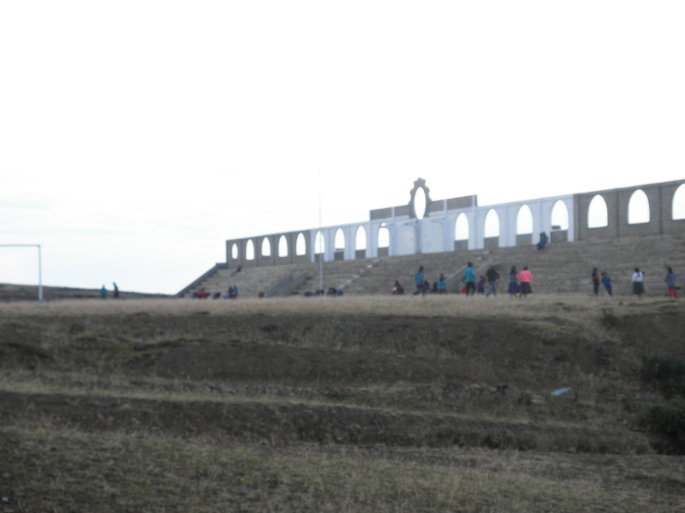 We reached the top just as the sun was going down, so there were amazing views of the sunset over the lake all around.  The center of the peak is a Pre-Inca and Inca temple, which we were only able to view from the outside.  It is tradition to walk around the temple three times counterclockwise.  As it got darker, we were able to see lights come on on the mainland of Bolivia.  Once it was really dark, we started the walk down the steep steps with only three small flashlights for 7 of us.  We somehow managed to make it down without any injuries.  The sky was mostly clouded over, but there were a couple of times when there was a break in the clouds.  The stars were breathtaking.  Because there are no lights at night on the island, the stars are really easy to see.  The altitude is high so we were also much closer to the stars than typical.  They looked like the galaxy and were simply amazing.  I don’t even have words to describe them. 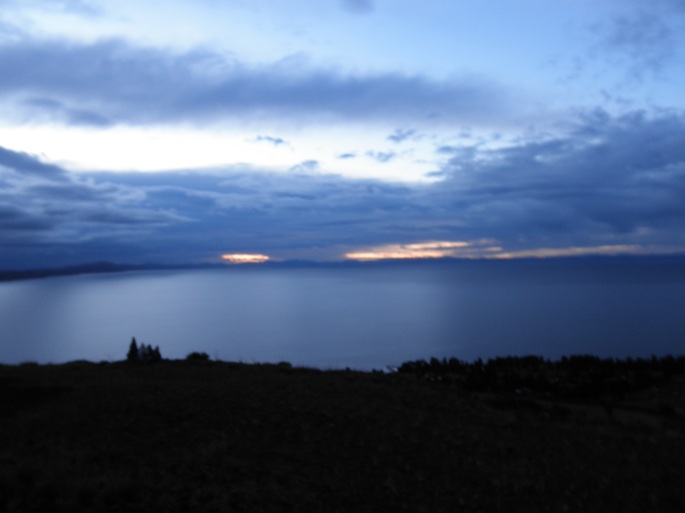 We returned to our hostel, where we sat in the lighted dining room playing with our host’s young son until dinner was served.  The dinner was a potato quinoa soup and rice with vegetables.  After dinner, we all got dressed up in traditional island clothing and walked in near pitch darkness to the town hall, where we participated in a dancing party.  We all joined hands and just danced around in circles, eventually moving outside to dance in a large circle around a small fire.  It was fun and definitely a unique experience I will never forget.  After the party, we walked back to our hostel (I almost tripped and fell a few times, but we all made it back safely) and immediately went to bed.

The following morning, we were served pancakes for breakfast and then headed to the dock to (sadly) depart from the island.  We were on the boat for about an hour or so before we arrived at Taquile Island, another large island on Lake Titicaca.  Taquile is best known for its knitted and woven textiles which are created by the men of the island.  Knitting is actually a very valued skill on the island and men cannot marry unless their knitting is good enough to impress the parents of the girl he wishes to marry.  It is a pretty long walk from the port to the center of the town.  Although life is very basic, the center of the town was more modern than that of Amantani Island.  I especially loved the stone paths on the island, which have stone walls built up on either side.  It reminded me a bit of Avonlea as described in Anne of Green Gables. 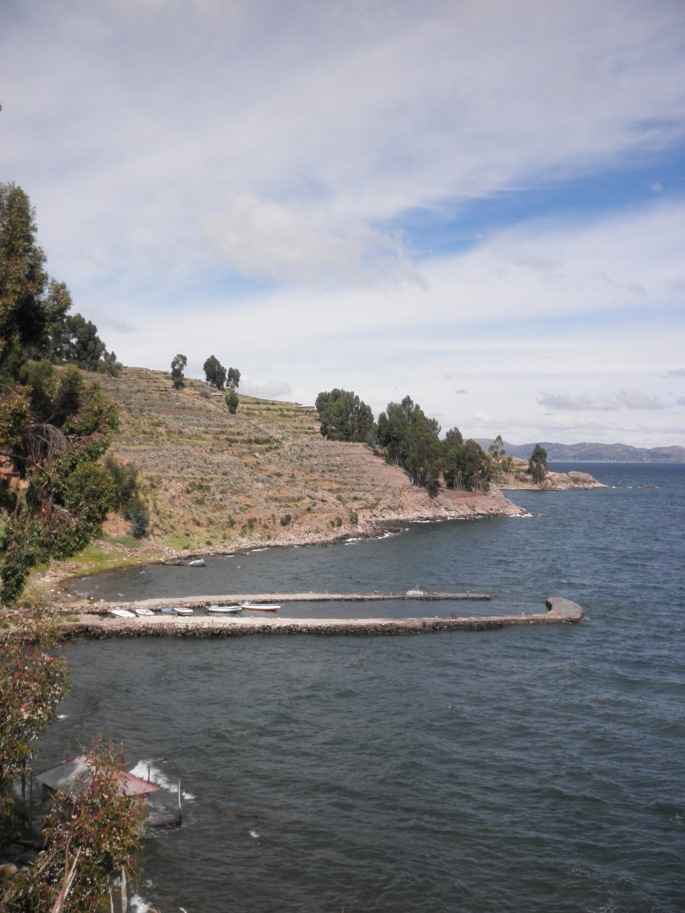 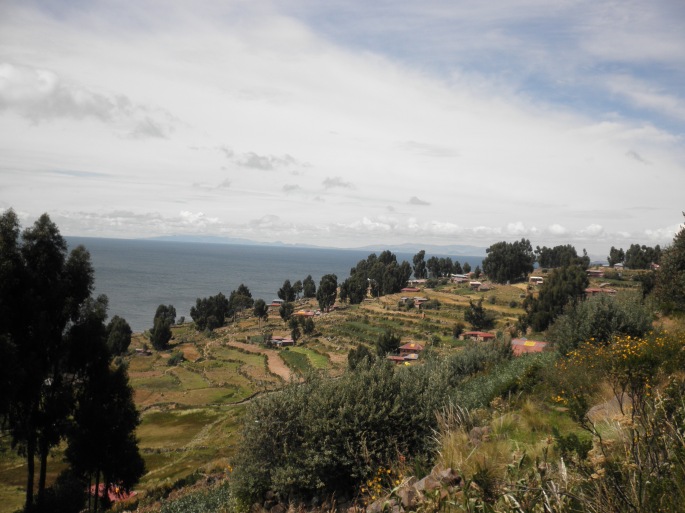 We walked a little ways from the center to a house, where our guide explained the traditions related to knitting in the town and showed us how they knit really tiny and precise designs.  We then ate lunch there- trout and quinoa soup with delicious bread.  After, one of the men showed us how they used a special plant to create a soap and shampoo that they use to clean the wool to spin into yarn and also for their hair.  We then walked up an around the side of the island towards a different port, where we were able to take pictures in the 2nd most picturesque spot in Peru (2nd only to Machu Picchu).  It was a steep climb down from there to the port.  We then boarded the bus once again and headed back to the mainland. 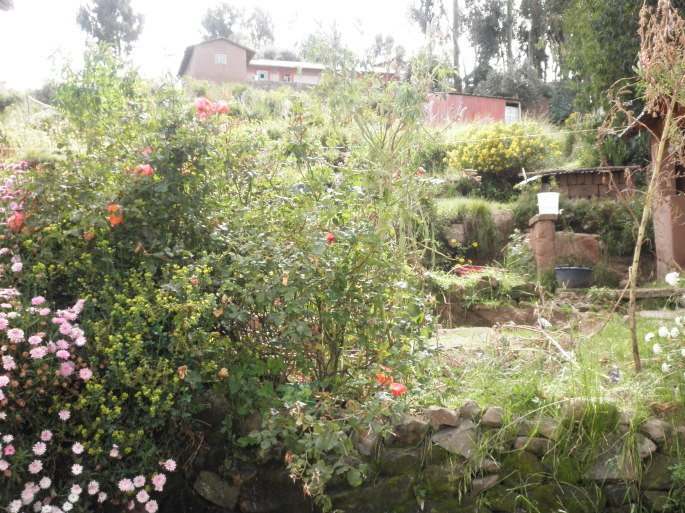 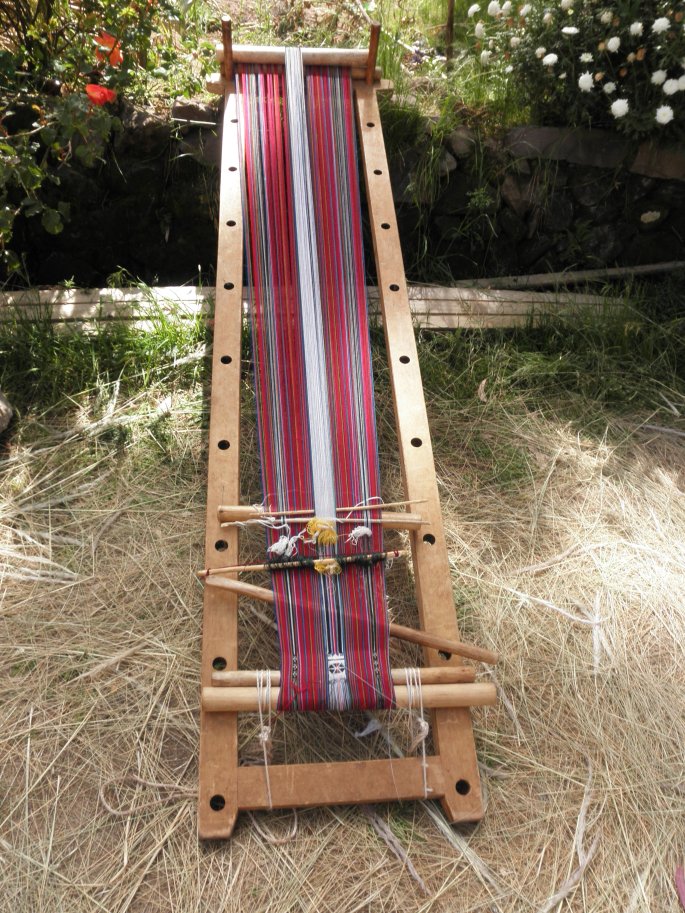 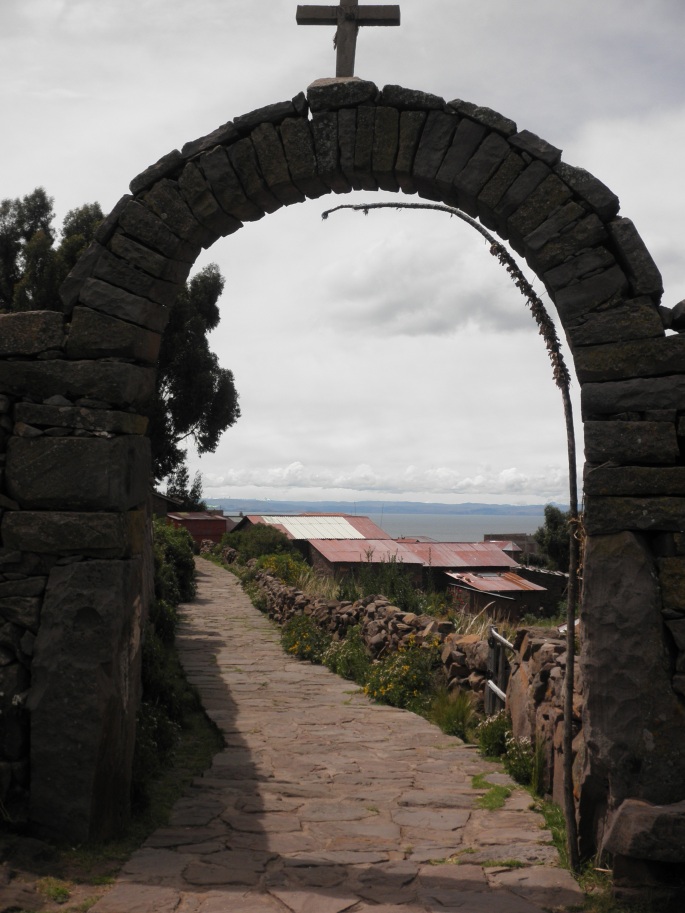 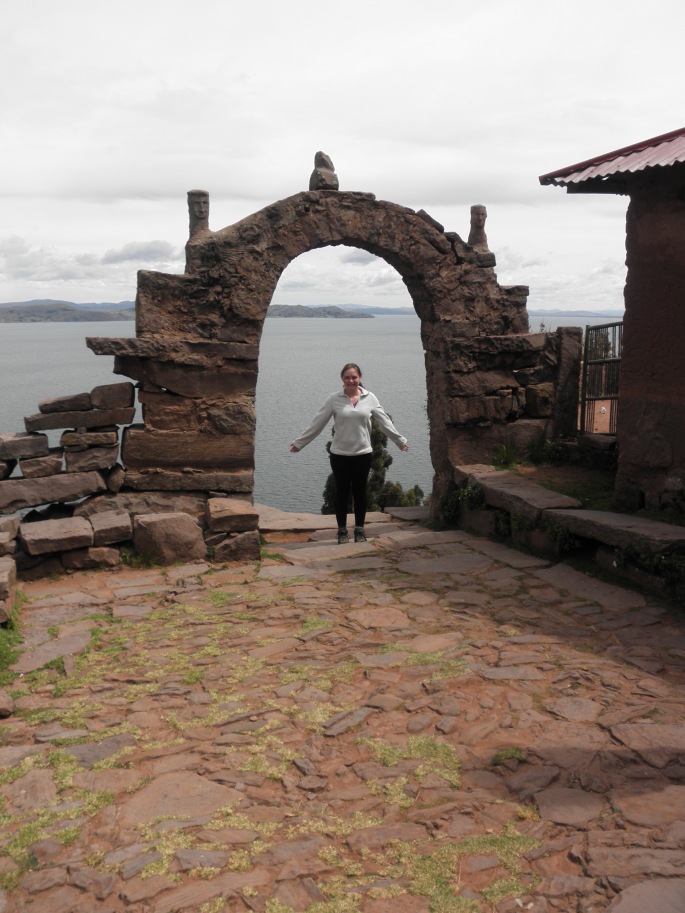 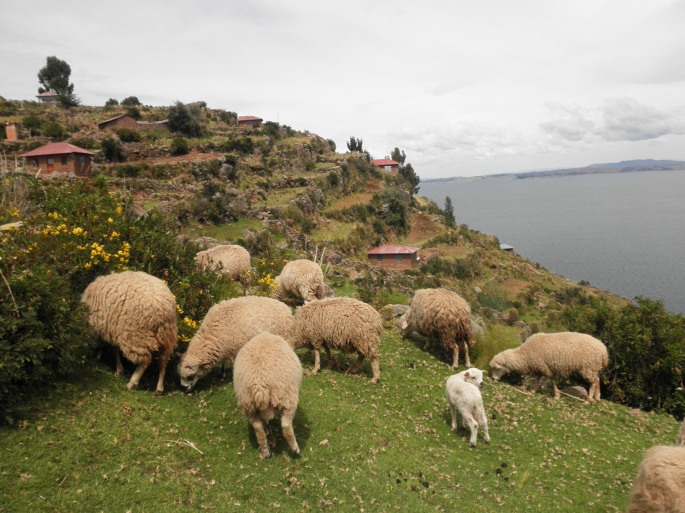 Once there, we showered and rested for a bit and then walked around the Plaza de Armas of Puno and got some ice cream before meeting up for dinner (I had lamb with garlic).  After, we played some cards and wrote our journals before heading to bed pretty early. 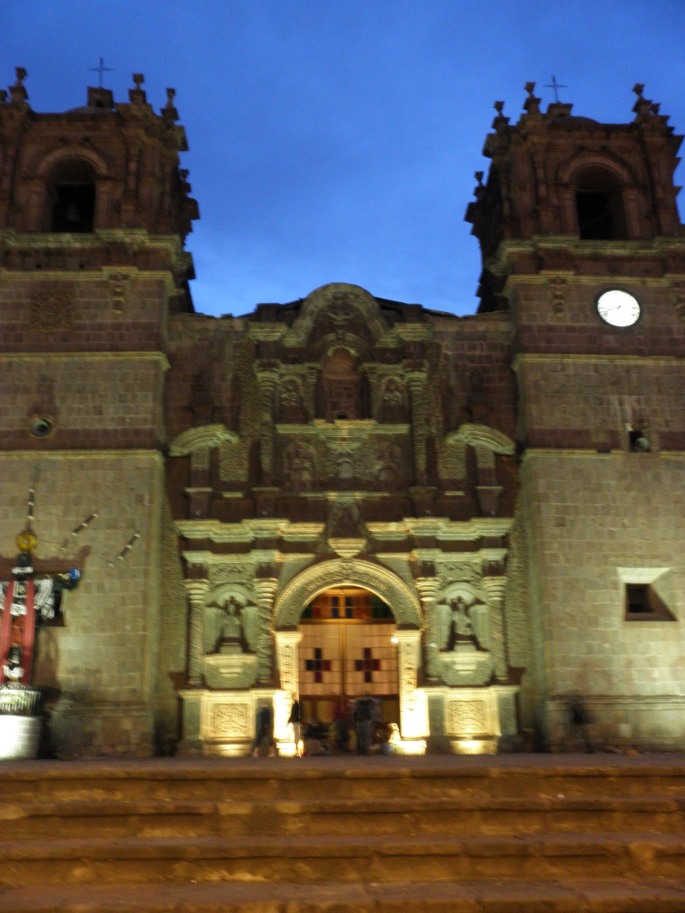