Towards the end of summer, I helped my brother clear out his dresser and get rid of a bunch of clothes he no longer wears.  Most of what he got rid of were old t-shirts from a variety of events and sports and such, but there were 3 shirts that I thought I might be able to make something out of for myself with.  One is a dark maroon color, one is a striped shirt with two different shades of blue, and one is a green and white wide stripe shirt. 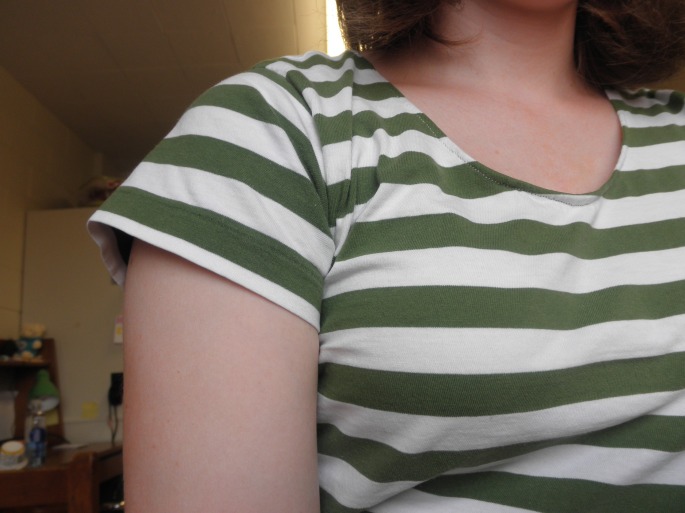 I decided to start with the green and white striped one first.  I used a shirt I already had (it was actually long-sleeved) as a guide, and made a simple t-shirt for myself out of it.  I used the original hem for the bottom and on the sleeves, which both made it a lot easier to sew and gave it a much more professional look.  I simply cut it out, sewed the sides, sewed the sleeves on, and finished the seam on the neckline.  It was super easy (I think I finished it in about 2 hours, start from finish) and I love the result.  It is the first piece of clothing I’ve made for myself and really worn often.  It is one of my favorite shirts now, and I have gotten so many compliments on it (they usually don’t even realize it’s handmade).

Before I cut into the original shirt, I took pictures, but unfortunately the “before” pictures, along with the step-by-step pictures of how I did it, were taken on my brother’s camera, which I do not currently have access to.  If he decides to send me the pictures, I’ll update this post to include them or create a new post.  I had a lot of trouble getting a good picture of the shirt without a tripod (I don’t have one at college with me) and in my dorm room, so I apologize for that.